"What did the archaic and republican Romans really eat," you ask? Well, a significant staple of their diet was a dish called puls, basically a porridge made of farro wheat grains. In fact, the closest thing to this today might be a 'wheatberry salad' at a place like Wholefoods. Later, the Roman diet moved away from this wheat porridge and towards bread in their diet -- but the bowl of cooked wheat, specifically the Italian produced type of wheat grain called farro, always maintained important symbolic and religious value for the Romans. Farro is still grown and eaten in the ancient way in Tuscany and is starting to become popular in American restaurants as well. Lets look at how to make this ancient Roman staple and then compare it to a modern dish I have discovered here in Rome!

Ancient Roman Puls
farro
water
1) This is farro, an type of wheat. It is a 'softer' wheat grain than the bread wheat commonly used today. It is better for keeping whole and boiling than for grinding and using as flour compared to harder bread wheats. 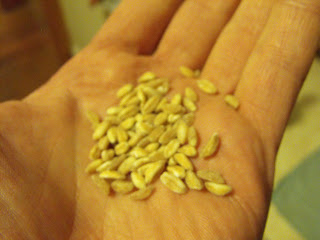 2) I will describe the simplest possible way to make this today, and will go though different variations in later posts. For today, mix one part farro with two parts water in a pot and bring to a boil. Then, reduce to a simmer and cook until the liquid is absorbed and/or the farro has a nice al dente texture. If need be, add more water. For a more soupy farro dish, use a 3 or 4 to 1 ratio of water to farro. Here it is cooking. 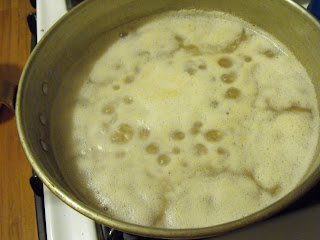 and here it is finished 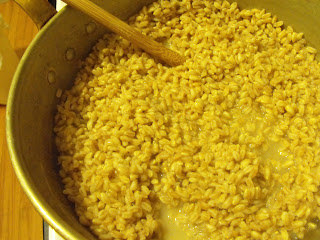 Add some salt and it is a delicious dish! There are many ways to cook this, but this is the simplest and I believe the most common in the ancient world. And, delicious!
Now, lets look at the example of this dish I have discovered just today in Rome! My friend Daira eats for breakfast every morning a bowl of coffee and milk with toasted wheat grain cereal in it! 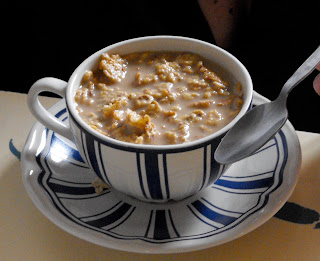 A bowl of cooked wheat in liquid! Just a few steps away from the ancient world here, today in Rome! So, you should eat some farro and maybe even this bizarro colazione! Enjoy!
Posted by Jake Morton at 10:35 AM